There are several competing theories as to the history of roulette, which trace the game back to either 17th century France or much further back to ancient China and Tibet. The plot thickens even further when you start to look at old English games (such as “Even-Odd”) that could either be forerunners of roulette or derivatives of the game, depending on which sources you read and how you interpret them. So where did roulette actually originate?
The most popular theory is that roulette was invented by the French scientist Blaise Pascal in 1655, as a by-product of his attempts to invent a perpetual motion machine. While he might have failed at this theoretically impossible goal, he did succeed in creating a gaming wheel that would spin smoothly and create a random result for a spinning ball. It is said that, with the help of his colleague mathematician Pierre de Fermat, Pascal worked out the probabilities of any given outcome and created the playing grid we see in casinos around the world today.

However, the origins of the game are confused by the advent of the similar “Even-Odd” (a/k/a Roly Poly), which arose in England at around the same time. This had a similar wheel to roulette, but instead of numbers, it had sections marked simply “odd” or “even”, with other sections belonging to the bank. Some theories consider Roly Poly to be a predecessor to roulette, while others believe that it came about much later, as a way of getting around gaming laws that prohibited the original numbered version of the game. Confusing things even more, many sources use the two names “roulette” and “Roly Poly” interchangeably, although some literature shows Roly Poly / Even-Odd to have been hugely popular in England around 1800, only to be almost entirely replaced by roulette by the middle of the century. However, which version came first is still open to debate. 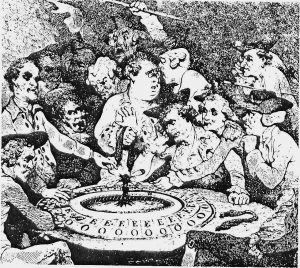 One thing that is known for certain is the origin of the bank-boosting zero on the roulette wheel. This was introduced by the entrepreneur Francois Blanc in 1863 when he took over the casino license for Monte Carlo. This new invention gave the house a guaranteed win, or house edge, an average of 2.7% of the time and won the approval of Charles III of Monaco, who was keen on encouraging the game since it boosted his tax revenues from the casinos.

The origin of the second zero, regularly found on American roulette wheels, is less clear. Many commentators are quick to blame the greed of American casino operators for creating an extra chance for punters to lose. After all, the second zero almost doubles the house edge to 5.26%. However, double zero wheels were seen in Europe long before the game appeared in the U.S., so they could have easily arrived there by chance, and casinos that didn’t know any better could have simply adopted them as the norm. Many early wheels even reduced the house edge by colouring the zero and double zero so that they would pay out for red and black, and designating zero as “even” and “18 or below” (manqué), while considering double zero to be “even” and “over 18” (passé).
Whatever its origins, roulette has now remained unmodified for over a century and a half and is unlikely to change any time soon. The iconic wheel and playing grid have spread across the world, becoming part of casino folklore from Macau to Monte Carlo and featured in everything from the classic movie Casablanca to Toy Story 3. Not bad for a game that could very well have accidentally been invented by a scientist attempting to achieve the impossible.